Millions of people every day use mass transit transportation as their primary source of transportation in New York City and in the greater tri-state area.  Many commuters use common bus carriers for intercity travel, such as Greyhound, Bolt, Peter Pan, Mega Bus, etc..  There are many benefits to using public transportation or common bus carriers.  But what one does not expect is for the bus or train (Amtrak, Metro, LIRR) to be involved in an accident.  Buses share the road with other drivers and collisions are always a possibility. Trains can injure passengers with derailment, excessive speed, and sudden movements. If you or a loved one have been involved in a bus or train accident, contact the MM Law Firm and speak to a bus accident lawyer or a train accident lawyer. 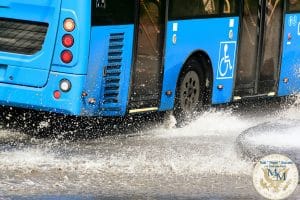 Bus accidents are a common occurrence in New York City and on highways.  Just like any other vehicle on the road, buses are just as susceptible to collisions. Bus passengers can be hurt quite easily as many do not come with seat belts, and commuters often have to stand while riding due to a lack of open seating. Thus, anything from sudden movements to collisions can seriously injure

passengers or even lead to fatalities.  Be leery of those disreputable bus companies that display as little information on their buses and about their company and their buses look like shit.  That’s probably because they are in terms of maintenance and repair.  Tire blowouts, engine malfunctions, smoke and fires, roll-overs and driver negligence and errors involving these disreputable bus carriers have all made the news.