I’m consistently amazed at how many drivers will claim “she ran into the side of my car” when a pedestrian is struck by their vehicle. As we’ve discussed 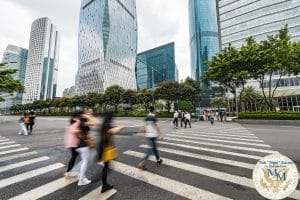 previously, even a significant front impact may leave little more than a scratch. So how do we prove that you were struck by a car and not vice versa? There are two primary ways: (1) medical documentation of injuries which tend to indicate a blunt front impact, such as lower leg injuries as a result of being struck by the front bumper and (2) your testimony. With regard to #2, you will be asked in your deposition when you first observed the vehicle you ultimately had an accident with. This is something of a trick question and it trips up many plaintiffs because no matter how you answer, you either saw it coming and didn’t avoid it or you didn’t see it coming and hence have no idea whether you were hit by the front or the side of the vehicle. Often there is some comparative negligence when a plaintiff admits that he saw the vehicle coming but was unable to get out of its way, but it is not uncommon for defendants to be found 100% liable where the plaintiff saw the vehicle coming a few seconds before the impact and attempted to avoid it, but was unable to do so due to the speed of the approaching vehicle.

The “duty to see that which is there to be seen”

The "duty to see that which is there to be seen" Though not expressly stated in [...]